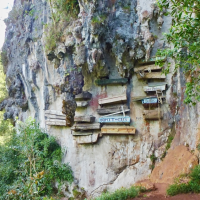 The funeral traditions in the states have stayed the same for many years now. We have a viewing, possibly a religious ceremony, and then a graveside service if the body will be buried. Cremation is also an option for those who don’t like the idea of a coffin. Keeping things the same might sound cliché to some, but it’s actually pretty helpful to have a sense of familiarity when families are going through a difficult, and often unfamiliar, time.

We’re not going too far away from home for this first one. Down in the Big Easy a jazz funeral is a common site. This tradition became popular in New Orleans thanks to the mix of African and European cultures in the city. A jazz funeral starts with a march led by family, friends, and a brass band and ends at the cemetery. The band will play somber music, called a dirge, during the march, but will switch to more upbeat music once the procession leaves the gravesite. The purpose of switching to upbeat music is to have a lively celebration of the life of the deceased.

There isn’t a lot of coffin design variation in America, but that’s not the case in Ghana. In this little African country coffins are custom made to reflect the deceased’s personality and hobbies. A coffin can be in the shape of a race car, animal, shoes, airplanes and just about anything that can be made out of wood. Making these custom coffins can take months, which often delays funerals.

Due to limited cemetery space in South Korea, the price of a burial is incredibly expensive. This high price tag forces most families to cremate their loved ones, but the ashes are made into colorful and decorative beads instead of keeping the ashes in an urn. Families can display these beads around the home.

Living trees serve as a burial site in certain regions of the Philippines. When a member of the community is nearing death, they will pick a tree in the forest and their family members will build a hut next to it. The dying person will live in this hut while their family works to hollow out a space in the trunk of the tree. Once the loved one has died, they will be vertically entombed in the trunk of the tree.