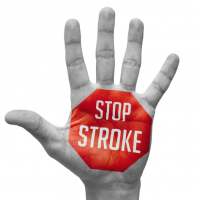 A stroke can be debilitating and life altering for both the victim and their family. Stokes occur when brain is deprived of oxygen because of a lack of blood flowing to the brain, which causes brain cells to die. It's important for an individual suffering a stroke to immediately seek medical help. That's why it's also important to learn about the warning signs and causes of strokes so you can act quickly when needed. Here's what everyone should know.

​Because the brain is being deprived of oxygen, the longer you wait to get medical attention when a stroke occurs, the more brain cells die and the more severe the effects. One of the most recognizable symptoms is sudden, slurred speech. For the victims of a stroke, you may also find it difficult to understand what others are saying to you. For some victims, there will also be a pounding headache, dizziness or vomiting. Vision is also impaired by a stroke. This could include blurred vision, or the complete loss of vision in one or both eyes. Physical motor skills are often affected as the victim will have trouble standing or walking, and have difficulty with balance. Finally, watch for localized paralysis in certain areas of the body. This is commonly seen in one side of the face, an arm or a leg.

​There are three primary categories of stroke that all caused by slightly different events in the body. Ischemic strokes occur when an artery in the brain is blocked or narrowed, which prevents proper blood flow and oxygen to reach the brain. Typically, this is caused by a blood clot forming in the brain's artery, or forms elsewhere in the body, but travels in the blood stream until it's lodged in the brain's artery. There are also Transient Ischemic Attacks, TIA or mini-strokes, which also are caused by a blockage of blood flow in the brain. These are only temporary, however, and typically last less than 5-minutes. In these cases, a blood clot or other debris blocks the artery, but is small enough to be moved by normal blood flow eventually. Victims of TIA strokes should seek medical attention, however, because it signals an increased risk of additional strokes. Finally, Hemorrhagic strokes are caused by burst or leaking blood vessels in the brain. This is usually brought on by head trauma, high blood pressure or can be a congenital issue.

​Certain factors put you at an increased risk of stroke. It's important to identify these factors and take precautions through medical care to work to lower your risk. A lack of exercise and being overweight significanlty increases your risk of having a stroke. So too do other unhealthy habits like smoking cigarettes, drinking alcohol or using recreational drugs. Medical factors, like heart disease, high blood pressure, diabetes, high cholesterol and sleep apnea can also increase your risk of having a stroke. Men over the age of 55 are typically at the highest risk, but if your family has a history of strokes or heart attacks, that can affect the likelihood that you'll be the victim of a stroke, as well.

At Cura-HPC, we provide hospice care for a variety of patients, including those who have recently suffered a stroke. If you have a loved one in need of care, or you'd like to learn more about hospice, we'd love you to contact us at 800-797-3839.