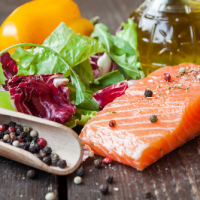 You likely already know that your diet has a significant effect on your health. Not only does the food we eat influence how we feel today, but it also influences our long term health. Research conducted by a European project, NU-AGE, recently looked into the Mediterranean diet and it's health benefits in the long term. Their findings suggest that sticking to a strict Mediterranean diet could slow down the aging process and keep bones healthier as we age.

First, a few notes on the Mediterranean diet. The most notable emphasis is a limitation of red meat. Those following the diet include red meat in their meals only a handful of times each month. Instead, fish is eaten on a regular basis, especially species that are rich in omega-3 fatty acids, which includes salmon, mackerel, albacore tuna and trout. Additional protein is taken from legumes and nuts. Fruits, vegetables, and whole grains are also prioritized in each meal. Butter is ideally removed completely and healthy fats like olive oil are used as alternatives. Salt is also removed or extremely limited and food is instead flavored with herbs and spices.

Previous studies have revealed that this type of diet reduces the risk of many varieties of heart disease, but NU-AGE also concluded that C-reactive protein, an inflammatory marker linked with ageing, significantly decreased. The rate of bone loss for those with osteoporosis was also reduced.

To reach these findings researchers recruited 1142 participants over the age of 65 across five European countries, France, Italy, Netherlands, Poland and the UK. Each individual was instructed to follow a personally tailored Mediterranean style diet.

In addition to findings directly related to health, researchers also learned of significant differences between nutrition education that exists between residents of different countries and in different socio-economic groups. For example, more than 70 percent of French and British participants responded that their nutrition knowledge was high, whereas only about 30 percent said the same in Poland. Participants from the UK and Netherlands scored the highest on the understanding of nutrition information and food labels, while Italian participants scored the lowest.

While this particular study exposed differences in European countries, similar conclusions can be drawn about different groups in the US. There certainly exists a different understanding and trust of food labels in different parts of the country. This lack of nutrition education can increase the likelihood of unhealthy diets, which raises the risks for a number of health issues later in life.

At Cura-HPC, we provide hospice and palliative care to those with life-limiting illnesses. To learn more about the services we provide and gain insight into whether they're right for you or a loved one, contact us at (800)797-3839.